Our U15 Boys secured the Div 3 Central League title on Wednesday night last. A super achievement!! A great hard working panel of players all year and dedicated mentors in Declan O’Connell. Kieran Savage, Aidan Savage and Patrick White. Thank to Declan and Kieran for all the match updates and match reports right throughout the season. Ballymac Abú!

Losing to Na Gaeil in the county league earlier in the year in a very high scoring game, and claiming victory over them in the group game in the central region, meant both teams were very evenly matched heading into this game. Winning is a habit, and not having lost in the group games gave our boys great confidence approaching this final.

A perfect evening for football and also the fact that referee Cathal Ó Dubhda arrived with a full complement of officials, made sure the game was handled properly from start to finish.

Opening the scoring for us was our very consistent free taker all year Micheal Savage followed by another from the boot of excellent Mairtin Mc Kivergan. Na Gaeils running game from their half back line was causing us some problems and with the outstanding Liam Cooper from Na Gaeil unerring from frees and from play he kept them ticking over right throughout the first half ending the half with all their scores, 0-9 points in total. At the other end Mairtin with two goals in the first half and two points from the boot of Micheal Savage had us ahead by one until Ciaran O Connell struck for our third goal in the first half to leave us 3-04 to 0-9 points ahead at halftime.

The second half was a tough thirty minutes football with both teams defending well. Our backs led by the excellent Tom Long at full back repelled attack after attack ably assisted by Cathal White and Steven Turner. At mid field Shane Gilroy gave his usual all action display from end to end defending and also chipping in with a very important point. Holding the Na Gaeil boys to five points in the second half was the winning of the game but also a huge contribution in the second half from the lively Ciaran O’Connell, scoring four excellent points after some great team work helped the boys land the spoils. A mention must also go to Jack Joy who played in defence for the start of the second half and when he returned to the forward division after the water break he landed a massive point from distance to the delight of all Ballymac patrons present. Cian Harris,Eoin Moriarty and Mark O’Connor when introduced did very well in the second half. The game finished on the scoreline of 3-10 to 0-15 points in our favour to the delight of all the players, management and supporters. The trophy was presented to joint captains Micheal Savage and Cathal White.

We would also like to thank St Pats for having the pitch in excellent condition for the game.

A great week for the under 15 panel while they also learned that the Gold team were awarded the Division 9 County League title following a review by The Kerry Coiste na nÓg. Captain Jamie Burke and the team will be presented with the trophy at training on Monday evening next. 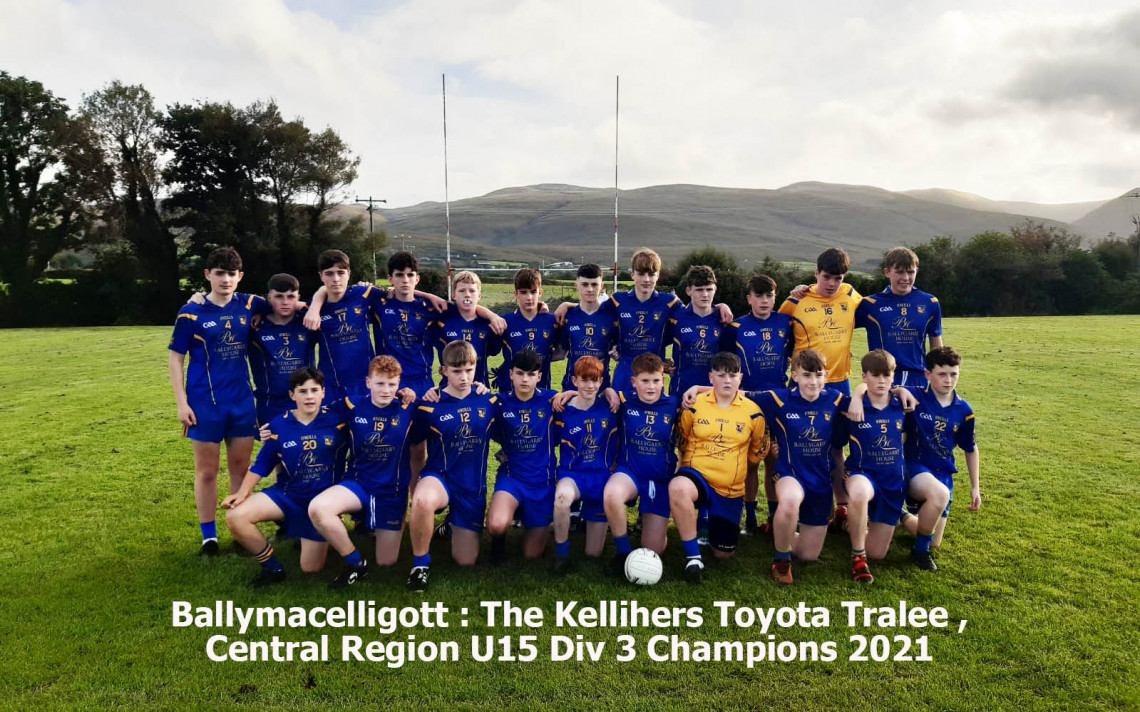